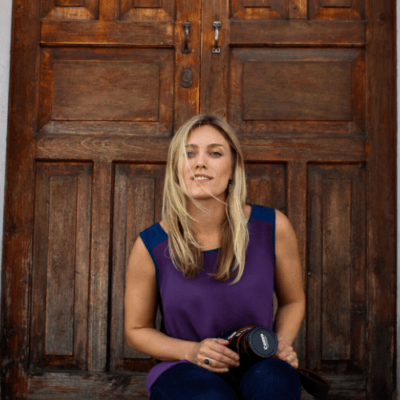 If you want to know what it’s like to climb Kilimanjaro, paraglide with a hawk (a.k.a. “parahawk”), ice climb while simultaneously shooting a PBS show, or SCUBA dive cage-free with bull sharks, Rachel’s your gal. She likes the stuff that makes palms sweaty, and brains explode with inspiration.

As an EMMY-Nominated On-Camera Host, Producer, Camera Operator, Writer, and Photographer, Rachel has traveled all seven continents, lived in three countries and journeyed through nearly 70 nations. Rachel loves dropping herself into faraway lands to relate their stories to outsiders. In fact, she does a good enough job of it that she was recently named an Explorers Club “Fellow” alongside greats like Buzz Aldrin, Sir Edmund Hillary, and Elon Musk.

Rachel hosts travel shows for clients like Travel Channel, ABC and Tastemade; produces series for networks like Discovery and Nat Geo; writes and shoots photography for publications for AFAR; gives TEDx Talks and storytelling workshops; creates custom branded and influencer content for companies like BMW and Athleta; and, once survived a charging hippo on the Zambezi River between Zimbabwe and Zambia. Rachel’s also a SCUBA Diver, Certified Wilderness First Aid and CPR Provider, and Every-Now-and-Again Pilot of craft like planes, boats, and jetpacks.